In 2017 the Philadelphia Housing Authority broke ground for a new headquarters to replace the agency’s Center City location, and consolidate several of the PHA’s secondary locations. 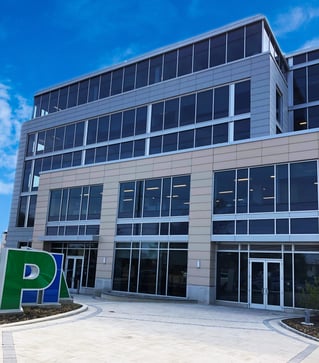 Located in the North Philadelphia neighborhood known as Sharswood-Blumberg, the new 136,600-square-foot building united the PHA’s operations and administrative functions under one roof. Home to over 1,200 employees, this mixed-use office and retail building including ground floor café and bank, serving both employees and neighborhood residents. The PHA was dedicated to serving their community through the design of their new location, with comfortable outdoor meeting spaces, bike-share parking docks, and easily accessible parking spots. The headquarters were designed for LEED Certification and meet the latest applicable Energy Star Standards, with features such as energy-efficient glass, advanced stormwater techniques, and a wide roof.

Façade Design
Located on a previously vacant triangular site along Ridge Avenue, Philadelphia’s BLT Architects aimed to design a building achieving monumentality without appearing institutional. They accomplished this on the 5-story façade by utilizing expansive glass windows paired with more modern materials, such as a stone base and NeaCera Terra-cotta Cladding. The architect chose a blend of Bright Gray, Cream, and Cream Light NeaCera rainscreen panels. Cream and Cream Light panels were thoughtfully arranged in an alternating pattern to create a dynamic element to the façade. Bright Gray panels extend from the base of the building to the top floor on two elevations, complementing the glass heavy façade. The glass element of the façade was intentionally designed to communicate the agency’s commitment to transparency, and forge a personal connection with the neighborhood. 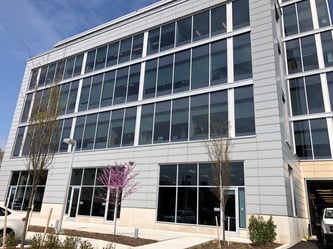 Neighborhood Revitalization
The Sharswood-Blumberg neighborhood is in the midst of a $500-million redevelopment and transformation plan by the PHA, which includes their new headquarters. This is the largest economic development project to land in the area since the 1960s. The $45-million headquarters, which opened to the public in 2019, acts as an economic driver for rebuilding the community and a hub for the PHA’s broad neighborhood transformation plan. This plan’s aim was to create 1,200 affordable, market rate, rental housing units, as well as create jobs by placing more residents and employees on the Ridge Avenue corridor. Construction adjacent to the PHA HQ will bring a restaurant, urgent care facility, hardware store, and a new Save-A-Lot grocery store to the neighborhood currently deemed a “food desert”. These developments show the city’s commitment to revitalizing this previously disenfranchised and neglected low-income community facing threats of gentrification. Sharswood-Blumberg was economically starved after a period of civil unrest in the 1960s causing the flight of residents and local businesses, and increased crime rates, transforming the neighborhood. The completion of the PHA facility gives hope and confidence in the future of this community.